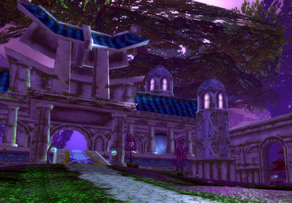 Darnassus is the capital city of the night elves of the Alliance. The high priestess, Tyrande Whisperwind, resides in the Temple of the Moon, surrounded by other sisters of Elune. In the Cenarion Enclave, the Arch Druid Fandral Staghelm leads the Cenarion Circle, often in direct opposition to his fellow druids in Moonglade and Tyrande herself.

Darnassus is arranged in terraces on the north, east and southern sides of a central lake area.

From her seat in the Temple of the Moon, the high priestess Tyrande Whisperwind rules with the support of her fellow priestesses of the Moon. In the Cenarion Enclave, Arch Druid Fandral Staghelm presides over his druidic compatriots, in personal opposition to the high priestess' rule. The Darnassus Sentinels are led by Elanaria, who has close ties with the trainers on Warrior's Terrace.

The Darnassus Faction has an "Exalted" rank. This means that if you prove yourself as a valued friend and protector of Darnassus, regardless of your race, you will be rewarded with a great boon by Tyrande Whisperwind herself.

There are a few Repeatable Reputation Quests which raise Darnassus faction and increase reputation:

Mobs killable for Darnassus Reputation are:

Retrieved from "https://classic-wow.fandom.com/wiki/Darnassus?oldid=2878756"
Community content is available under CC-BY-SA unless otherwise noted.