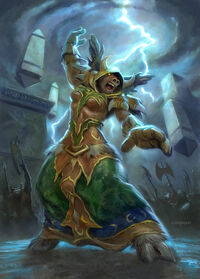 Druids are the keepers of the world and masters of nature with a diverse array of abilities. They are powerful healers, capable of curing poisons and raising fallen comrades in the thick of battle. Druids also command nature's wrath, calling down ranged blasts of energy, summoning swarms of insects, or entangling their foes in the earth. But druids are also masters of the wild, able to shapeshift into a great bear, cat, or even sea lion, gaining their powers in combat or travel. Druids are a diverse class with a variety of playstyles, capable of filling any role.

The Druid gives players several play style options. A Druid in normal form is a caster that can fight with spells or weapons. In Bear form the Druid becomes a Warrior with Rage. While in Cat form the Druid becomes a Rogue with Energy and stealth. The Druid can also transform into two other special animal forms. With its ability to heal itself and fellow characters, the Druid can also take on the role of a Priest. A Druid is not as versatile in its abilities as a Priest is, lacking the spells Power Word: Shield and Resurrection, but is otherwise a very capable healer.

Retrieved from "https://classic-wow.fandom.com/wiki/Druid?oldid=2878604"
Community content is available under CC-BY-SA unless otherwise noted.