Hammerfall was formerly one of the largest of the Alliance internment camps. It was attacked and destroyed by Thrall and the Horde in order to free the orcs held captive there. Shortly after the end of the Third War, the Horde re-occupied the ruins of Hammerfall to use as a forward base in the Arathi Highlands.

There is a flight master, an inn, a mailbox, and a few quest keepers. Behind the village is the Horde portal to fight in Arathi Basin. Arathi quest givers and Arathi Basin token vendors are located there.

This is also the location of the Hammerfall Hospital, where the Horde Triage can be taken for Artisan First Aid. Doctor Gregory Victor teaches Runecloth and Heavy Runecloth Bandages.

Hammerfall is under siege from the combined forces of Boulderfist ogres and Witherbark trolls of Arathi. In addition to the

[32] The Hammer May Fall quest chain, groups of Witherbark trolls occasionally charge from Witherbark Village in the south. They run up the path to Hammerfall's front gate and start attacking the guards. While the guards are capable of staving off each attack, players can also engage the attacking trolls.

Near entrance to Arathi Basin:

Near entrance to Arathi Basin:

Drum Fel is the main quest giver for the Hammer May Fall quest chain that is started by Tallow in the Hillsbrad Foothills.

Tor'gan is the troll just inside the front gates, and Gor'mul is an orc to his left below the flight master.

A picture of Hammerfall before the battleground entrance was added.

A picture of Hammerfall after the battleground entrance was added. 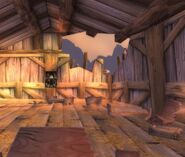 A picture of the inside of a building in Hammerfall before changes. 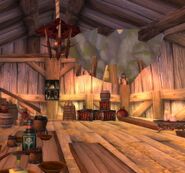 A picture of the inside of a building in Hammerfall after some cleanup.
Add a photo to this gallery

Retrieved from "https://classic-wow.fandom.com/wiki/Hammerfall?oldid=2879089"
Community content is available under CC-BY-SA unless otherwise noted.