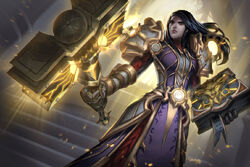 Guardians of the Holy Light and defenders of the Alliance, paladins bolster their allies with holy auras and blessing to protect their friends from harm and enhance their powers. Wearing heavy armor, they can withstand terrible blows in the thickest battles while healing their wounded allies and resurrecting the slain. In combat, they can wield massive two-handed weapons, stun their foes, destroy undead and demons, and judge their enemies with holy vengeance. Paladins are a defensive class designed to outlast their opponents.

The Paladin is a mix of a melee fighter and a secondary spell caster. The Paladin is ideal for groups due to the Paladin's healing, Blessings, and other abilities. Paladins can have one active aura per Paladin on each party member and use specific Blessings for specific players. Paladins are pretty hard to kill, thanks to their assortment of defensive abilities. The Paladin can also heal with Holy Light, unlike other combat classes. The Paladin is an Undead specific fighter as well, with several abilities designed to be used against the Undead.

Retrieved from "https://classic-wow.fandom.com/wiki/Paladin?oldid=2878540"
Community content is available under CC-BY-SA unless otherwise noted.