South of the Barrens

Thousand Needles is a huge dry canyon in Southern Kalimdor, filled with towering mesas. In the east, the canyon opens up to the Shimmering Flats, a vast salt pan that is used by goblin and gnome engineers for their races.

Although as a contested territory this area doesn't see anywhere near as much action as some, Darkcloud Pinnacle is a favorite stealth ganking spot for Alliance rogues due to the many Horde quests there as well as the relative difficulty of the mobs/remoteness of that location. The Alliance also tend to attack the Great Lift and Freewind Post regularly. In addition, players questing on the Shimmering Flats near the Tanaris border are advised to look over their shoulder from time to time, as the unwary can occasionally find themselves being stabbed in the back by a passing member of the opposing faction.

The barren canyons of Thousand Needles have traditionally been the territory of several Tauren tribes. The Tauren were forced to live precariously on the tips of the high mesas in order to avoid the large tribes of centaur that almost wiped them out. Now, with the help of the Horde, the Tauren are fighting back against their enemies, including the fanatical Grimtotem tribe. The Shimmering Flats to the southeast are also the home of the world famous Mirage Racetrack, where gnomes and goblins race their respective rocket cars in order to permanently settle the question of which race has the better engineering.

It has been thought by a night elf of Thalanaar that dark magic of some kind blighted the land.

Alliance characters will first reach Thousand Needles from the north. The traveler can take a boat to Theramore Isle in Dustwallow Marsh , run west to the Barrens, then south to the Great Lift and into Thousand Needles; or head south from Ratchet in the Barrens (Ratchet can be reached either by boat from Booty Bay or by running south from Ashenvale).

From Camp Taurajo in the Barrens, head south along the road to the Great Lift and down into Thousand Needles.

Thousand Needles contains no dungeons, raids, or battlegrounds. The only flight path in the zone is the Horde-aligned Freewind Post; however, Thalanaar, an Alliance camp with a flight path, is just over the border in Feralas. 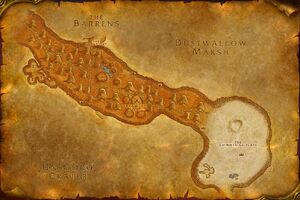 There is only one flight path in Thousand Needles, and that is Horde-aligned Freewind Post. However, Alliance travelers can use the nearby Thalanaar flight path to the west, and the flight path in neutral Gadgetzan to the south to navigate the zone.

The Thousand Needles are home to several characters of note. At Freewind Post, Cliffwatcher Longhorn seeks aid in the battle against the Grimtotem Clan. At the Weathered Nook, Dorn Plainstalker attempts to teach members of the Horde about Faith, Endurance, and Strength. And at the Mirage Raceway, Kravel Koalbeard sends bold adventurers around the world in search items that will give him personal gain in his bets at the gnome and goblin races.

Retrieved from "https://classic-wow.fandom.com/wiki/Thousand_Needles?oldid=2879129"
Community content is available under CC-BY-SA unless otherwise noted.